Michael Johnson currently serves as the President of BAA.  He has over 15 years of service with BAA starting back in the fall of 2004 when his daughters’ wanted to play soccer and the coach needed a sideline judge and asked if he could help.  Since that day he has served as a soccer, softball & floor hockey coach. Became equipment director for softball then he served as City Director of softball and floor hockey. In 2017, he became the VP of Equipment and in 2018 President.  Michael owns and operates his own residential painting company since 2014 and before that was in retail management for Eddie Bauer and Kohls for 10+ years. Michael and his wife have two daughters who grew up in BAA but now have graduated from college.

Kent Lindell has been a member of the BAA Executive Board as a VP of Sports Operation for several years. Kent also serves the Board as the City Director of Baseball.

Virg Senescall has been a member of the BAA Executive Board as a VP of Sports Operation for many years. Virg has also been serving as the Golf City Director for a couple of decades.

David Schulze has been serving on the BAA Executive Board again since May 2019. This is not the first time that Dave has been a key member of our organization, we welcome him back as the VP Community Relations!

Joslyn Biever joined the Bloomington Athletic Association Board and Executive Committee in May 2019 as the VP of Development.  Joslyn is the VP of Philanthropy at Children’s Minnesota and brings more than 20 years of non-profit and fundraising experience to BAA.  Prior to joining Children’s she served in various leadership roles at the University of St. Thomas and the University of Minnesota. Joslyn also volunteers with her church and previously served on the St. Paul Area Chamber Board of Governors.  She lives in Bloomington with her two sons and is passionate about ensuring all kids in Bloomington remain active through participation in youth sports. Her boys have played BAA football, basketball, baseball, soccer, and wrestling.

Rob Collins joined the BAA Board and Executive Board in January 2020 to serve as the VP of Marketing. He brings over 28 years of experience in marketing and advertising to the team including serving clients and working for brands including McDonald’s, Nike, Valvoline, Buffalo Wild Wings and Jack Link’s Protein Snacks. Rob has also served as a volunteer for the American Marketing Association, American Heart Association, as an assistant Den leader for the Boy Scouts of America and an assistant coach for BAA. Rob, his wife and three children moved to Bloomington from Des Moines in 2012. The Collins family are active members of the BAA community including participation in Golf, Volleyball, Basketball and Baseball.

Glenn Riemersma has been serving as the Treasurer of BAA for several years.

Stephanie Nicholson has been serving BAA as the Administrator / Secretary since May of 2019. Before taking on Administrator Role Stephanie served BAA as the VP Marketing and on the sidelines in many different roles while her kids were playing baseball, softball, soccer, or track meets. Stephanie has spent many years managing projects, sales, and assisting people with navigating websites. Stephanie and her husband both sit on the BAA Board and when they are not busy with BAA they are busy watching their kids in sports, plays, and advancing in scouting. 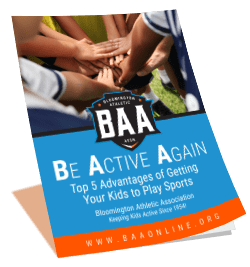